Home
La Spiaggia
Area and services
How to reach us 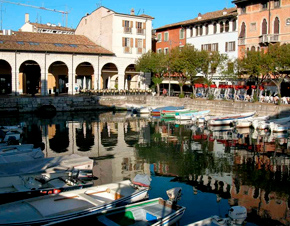 Desenzano del Garda La Spiaggia camper camp-site is located in Desenzano, a town considered the "capital of Lake Garda" because of its appeal, importance, and geographical location.
Our guests can therefore take advantage of everything Desenzano has to offer: gorgeous beaches, an animated night life, hip clubs and events of great interest. Even the shopping in Desenzano is vivacious, thanks to the presence of prestigious shops that meet every tourist's desire. Comfortable and capacious motorboats disembark from the port for unforgettable cruises on the lake.
Aside from Desenzano, the southern area of Lake Garda boasts some of the most beautiful villages in Italy, which have always been sought out by tourists from the world over.
From our camp-site you can conveniently reach all of the most well-loved villages on both the Brescia and Verona side, such as Sirmione, Manerba, Salò, Peschiera, Lazise, etc. 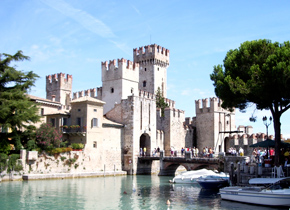 Sirmione Just a few kilometres from Desenzano is Sirmione, another of the world renowned towns of Lake Garda. Of greatest appeal is certainly the spa, the most important one in Italy. The water that rises there is rich with properties both preventive and therapeutic.
There is also great historic and artistic importance in Sirmione; its patrimony consists of remains that date back to the Romans and medieval times. Other than architecture of religious interest, the countryside is spotted archaeologically important monuments such as the famous Grotte di Catullo and the marvellous Castello Scaligero, facing directly onto the lake and giving way to the historic centre.
Strolling along the alleyways of Sirmione also means discovering many boutiques, restaurants and places animated day and night.

Manerba del Garda The natural spectacle that characterises the territory of Manerba absolutely must be discovered: the harmonious union of the lake and the gently rolling hills makes it unique. In particular is the Rocca, which rises up on a rocky promontory that peaks over the lake for a breath-taking panoramas. Of great interest is the Parco della Rocca surrounding it, with its expanse of trees and endemic brush and typical Mediterranean vegetation.
Amusements and diversions never disappoint in Manerba, such as concerts, street markets, feasts and celebrations. 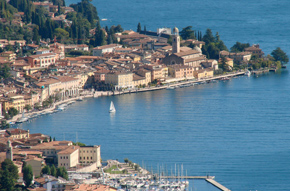 Salò On the south west side of Lake Garda is Salò, a village famous for being the first municipality of the Riviera dei Limoni, including all of the western part of the Lake up to the village of Limone. It can be reached conveniently, given its proximity to Desenzano, and its views are marvellous, because it rises up over an enchanting gulf at the foot of Mount San Bartolomeo.
The alleyways, squares, and many sophisticated and elegant noble dwellings that animate Salò are characteristic.
The Municipal Administration of Salò organises countless events of great interest for tourists: shows and events draw tourists from all over the world, especially in summer. 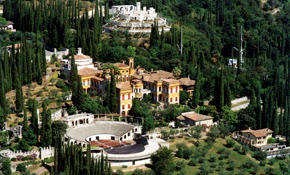 Gardone Riviera and the Vittoriale degli italiani Gardone Riviera is certainly one of the most fascinating places along the Garda because of its richly beautiful centre and culture. Along the cost are some of the most historic hotels in Italy and the atmosphere you breathe is truly charming.
The name Gardone Riviera is inextricably linked with that of Vittoriale degli Italiani, annually attracting millions of tourists and considered a national monument. Home of the poet Gabriele D'Annunzio, who lived there from 1921 to 1938, the Vittoriale is a monumental citadel with buildings, passageways, squares, gardens, and an outdoor theatre. The theatre itself, known as the Anfiteatro del Vittoriale, puts on the Festival Tener-a-mente every summer, hosting artists of world renown. 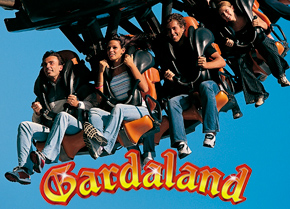 Peschiera del Garda and Gardaland The first village on the Verona side of Lake Garda is Peschiera, only a few kilometres from the province of Brescia. Truly fascinating, it boasts precious historic and artistic testimony to various eras (from the medieval period to the last century), Peschiera is characterised by its graceful historic centre, rich with typical places and highly loved for its shopping and good food.

Between Peschiera and Castelnuovo del Garda is Gardaland, the most important amusement park in Italy and among the best in Europe, visited annually by millions of people and an infinity of families with children. It offers a great variety of attractions for adrenaline-junkies and lovers of fantasy and adventure alike. Fun is assured and nothing is lacking at Gardaland. You can also admire some of the most beautiful marine creatures of the planet at the spectacular Aquarium.

Lazise and Terme Lazise offers its visitors enchanting landscapes characterised by a highly varied nature. The village is mainly known for its spa, the Terme. The vast spa Parco Termale del Garda, in the hamlet Colà di Lazise, provides unforgettable moments of wellness.
There are many chances for diversions and respite for those who go to the Parco: from the splendid strolls fully immersed in the surrounding nature to the sporting and cultural activities.

Bardolino Don't miss Bardolino on the Verona side. Its historic centre is considered among the loveliest on Lake Garda and the area surrounding the village offers tourists enchanted country scenery and a magnificent hilly landscape. Bardolino is also well known for its wine production, for which a namesake museum was inaugurated in the 1990s.
These are only a few of the villages you absolutely must visit while at Lake Garda, but many other places deserve visiting: the entire lake is rich with charming scenery, fascinating places and beautiful beaches for you to soak up the sun and relax. Don't forget the countless possibilities for sporting activities: sailing, windsurfing, mountain biking, trekking, golfing, horseback riding and much more for an unforgettable holiday. La Spiaggia camper camp-site is strategically located to conveniently enjoy all of what Lake Garda has to offer.
torna su
Tel: +39.030.9140243
Area sosta Camper La Spiaggia
credits